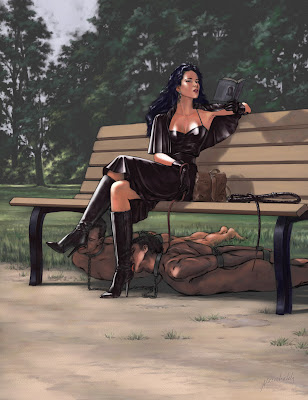 Above u find yet another picture from the masterful hand of Nanshakh. This time in its unedited form. Consider it a tribute to this giant among the giants. It was drawn by him a couple of years ago, and meant to grasp my physical appearance and personality. These days one can encounter this fabulous illustration on many sites around the Net, often stolen, but also decorating the site of a pro who caught his heart and to whom he is supposedly a slave now. Well, so to speak eh, cos i don't think he's participating in the flock of human dogs she's entertaining.

Ø and………..
Ø the rest of the congregation still waiting in the waiting room

Told u………i’m a regular Florence Nightingale, the Lady with the Lamp, Ruthless Rubber Nurse, enhancing ur discomfort and pain.