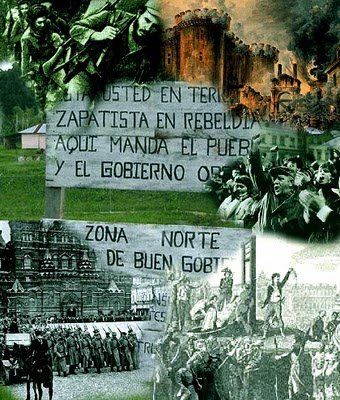 With all the turmoil going on in Egypt now, i noticed that many people believe this uprising is yet another example of great things to come. Things will turn for the better now. My dear friend Rita is one of those, filled with hope and anticipation. The other day she wrote a blog about this, accompanied by some fine videos.

So finally we r on our way to a better world? Finally we entered an era in which we will defeat despotism, dictatorship, vanilla slavery, corruption, indifference, egoism, war, etc? Finally we’ll taste the sweetness of freedom, solidarity, harmony, democracy, and feel all like brothers and sisters embracing each other in joy and happiness? Yep, that’s what many believe, or want to believe. And yes, it was and is a long time dream of many humans. A dream dreamt through many ages. A great dream indeed. A fabulous one even. One to go after. One, which beyond the shadow of a doubt, is worthy to become our quest and goal in life. One to fight for, and to die for.

Zillions of people who came b4 us, followed that dream. Indeed many died for it. And in vain! Looking at the world today, i don’t see this dream became reality. Not by a long shot. Billions of people r still suffering in poverty. Billions r still living in fear. Billions never tasted freedom.Many rot in the prisons of tyrants for simply having an opinion deviating from the prescribed norm. Many have to work in horrible environments and against terrible wages, to provide us, the privileged ones, with products we don't really need. No, the dream was never fulfilled!

How is this possible? How come so many great people, who truly believed they fought for the right cause, failed?

There were uprisings, revolts, and revolutions, throughout the history of mankind, and none of them ever brought the change people so dearly wished for and desired. Oh sure, there were some short periods of enlightenment now and then. But they all eventually vanished, like an abandoned path in the jungle.

The French and Russian revolution had major impact u say? Yeah right. Just look at those countries now, and the spin off these mass movements had and have on our togetherness nowadays. Oh, in case u want to do a little research urself, educate urself, and not simply take my word on this, go for instance here.

Large groups of people will never bring the change u r fighting for Rita. As long as the individual person doesn't demand (that’s right, demand, and not only willing) to be held solely accountable for her/his actions, hasn’t created an inner drive to be responsible for him/herself, and as long as she/he needs a leader, a messiah, a guru, a hero, or a deity, things will stay the same. Holy democracy can only live up to its promise, when the members of it will stand tall for the integrity, rights, and interests of the members of its minorities, when they will stop preaching that might makes right, and will erase that horrible and debilitating idea, that the majority is the only anchor and only standard in such society.

So, like i lectured many times b4, group movements will never bring the changes we dream of. It will only bring us shifts in power. History should have made that clear by now. Even great men like Emiliano Zapata, once in power, had to deal with the foul taste of corruption. At least he was one of the few who corrected himself. Most leaders will not! Learn from it for a change. Don’t continue to fall into the trap that “teamwork” will do it! Only individuals can bring change, by changing themselves and being a role model, or to allow coming to the surface that what was hibernating deep down in their soul for a long time already, but was suppressed by cowardice and the norms and values in force in their community. In the beginning it always will be on a small scale. But it will spread. Like oil on water. Each and every one of us has this potential. It’s one of our good traits. But we need a tremendous amount of courage to honor and exploit that trait, as there will be an enormous amount of resistance to change as well. I can tell from plenty r/l first hand experiences. Even here, in silly Cyberspace, there r people who r trying to silence me, to slander me, or, like it is done now for instance with my blog “Snippets II” and a few other caliente ones, boycott me (grin). Others don’t even dare to comment on my blogs, afraid as they r for losing their “friends” if they would. So they write to me in private, lol.

Often the actions of the majority will overwhelm us, make us doubt and question our own intentions, values, goals, and even the core of our being. Then we will let go, chicken out, and again follow the majority and its power hungry leaders, on their insane road of more of the same. Then, the dream will become a nightmare.

I just saw on the news: “Egypt is free. Egypt is free”. Well, we’ll see. In the meantime, remember this one? And what became of it?