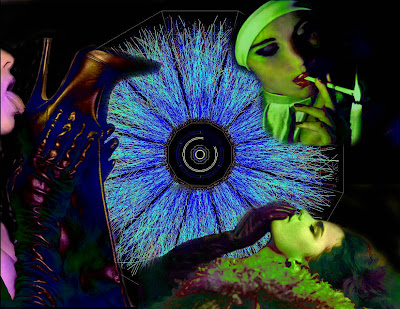 Anyway, Rita was sad. Couldn't figure out exactly for what reason tho. There was something about orthodox Christians or something. Maybe she was sad cos these Christians collaborated with the Germans during WW II, in order to help them to make the Jews disappear from the face of this planet. Nothing new there. Since ages they embraced anti-semitism. One of their saints ( a holy man eh), going by the name of John Chrysostom, was a champion in that area. It always baffles me when people who were and r persecuted themselves in horrible ways, quite often have an urge to persecute others. If not mistaken, some 50 million orthodox Christians were slaughtered during the ages, and still they too were fanatics in organizing one pogrom after another to kill the Jews.

I leave it at that, as that was not the reason to write this blog.

My inspiration came from the second video there, namely Sarah Brightman’s “Ave Maria”. I’ve heard many interpretations of it, but this one is special! If u know the song (and which God fearing and tax paying Christian doesn’t?), u know it’s one of those moving traditional religious top hits. In fact i play and sing it myself sometimes, cos i love the melody.

Here r the lyrics. Also in English for the morons who don’t understand Latin.

Hail Mary,
full of grace,
the Lord is with thee;
blessed art thou among women,
and blessed is the fruit of thy womb,
Jesus.
Holy Mary,
Mother of God,
pray for us sinners,
now and at the hour of our death.
Amen.

Btw, u should know Latin and Greek u know. I mean, as a Christian u shouldn’t only rely on the Saint James version of the Bible eh? Or the translation from Wycliffe and Purvey for that matter. Try it in Greek sometime. Even better to study the Hebrew text u know. Oh u don't read Hebrew either? Tsss...tsk. What kind of world citizen r u dammit? A mono linguistic one? Nooooo, i can't believe that. Not u. U speak more than one no? U r capable to understand the real thing, the true word of ur master. Well i mean all three of them of cors. What u say? U don't? And still u claim to be an aficionado of Christian morals, abiding by them no matter what? How do u know these morals r the true ones? U trust the translators? U trust the ones who taught them to u? U sure? No doubts at all? Ah i see, u say ur driven by them, but now and then u just forget about them, simply straying from the Path of Light, the Universal Truth, when it's convenient to u, when u want to get back at ur spouse, or the opportunity to make some fraudulent earnings is way too tempting to be bothered by some ancient rules. And why shouldn't u eh? Forgiveness is around the corner. Ur God will love u anyway, no matter what scumbag u r. And then........there's always his mom, um, the mom of one of them to be precise, going by the name of Mary, the spouse of Joseph, aka Maria, the one woman on this planet who got pregnant and still kept her virginity. I never understood why that was so important. I mean having to be a virgin when giving birth to one of them triplets,. Must have something to do with morals i think. But since i myself am a saint, i will be lenient on that. So enough of this. Back to Mary, aka Maria. She'll lay in a good word for u, protect u, and save u from eternal wrath, when everything goes wrong, and Yahweh is too pissed off with u to remember u r his child too, and therefore has to love u. Yep. moms can come in handy sometimes. I can tell, cos i'm a mom too.

All this sounds a bit farfetched to u? Well it happens u know. And i know all about it. So relax, go on preaching ur fine morals, and act against them when u see fit. No harm done. Really. Nothing to lose a good night's sleep for. It's all good. And u know what really will help? To tell others how sinful they r. Yes, do it, throw that darn stone. What? Wait! Make that an avalanche of rocks! The more the better. Down with these no good sinners, these assholes of humanity. Will give u an excellent feeling how righteous u r. A true child of the Lord. Nothing can happen to u now. Sheer delight will be urs. U belong to the chosen ones, and when ur body starts to decompose, u will fly away and be the champ of the heavens. Now that's what i would call a future to fight for. Praise the Lord and pass some more stones. Yeah. Hallelujah!

I'm sure tho, as a true seeker of virtue and obedience, u mastered Aramaic. Go ahead. It's fine too, and way closer to the word of the Lord ur God, than all the altered and manipulated ‘translations’ of later ages.

When watching that video, it’s hard for me to believe Sarah is singing about the Virgin Mary. Even when i heard her singing “Ave Maria” in Vienna last year, i had the same feeling. Look at her? Can’t u feel it too? This has nothing to do with a blessed woman, chosen to carry the kid of ur God. It’s about seduction, unbridled sex, passion, lust, and the desire to devour the other. It’s the song of the Siren! It’s an ode to Lilith! Or………Maria Magdalene?

Btw......any idea, what the background of my collage stands for?
Posted by Ayesha at 6:16 PM