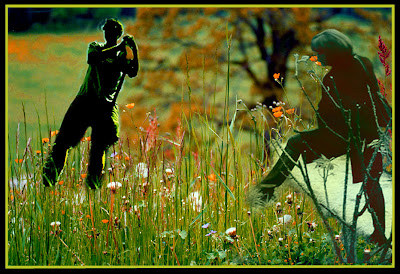 Bang! There he was. Big truck. Big trailer. Lots of garden tools, electrical ones as well as those working on gas. Plenty of fertilizer and insecticides. The man himself was big too, with a big smile, and very self-confident. A man of the garden world so to speak. I was informed, he had attended garden school, and graduated summa cum laude as the best of his class. Indeed he was a class apart. His references were impressive. He had worked for the crème de la crème of society, was celebrated by the jet set, and had gathered several trophies during garden contests. He was a gardener all right, if not THE gardener. Not that he did a lot of gardening himself nowadays. For that he had his workers, while he restricted his actions to managing his staff. He watched them like a hawk in heat, not missing anything they were doing, correcting , guiding, and disciplining them, if they dared to deviate from the rules, his rules.
His gardens looked beautiful. His trees blossomed when blossom-time was there. His flowers bloomed, and his lawns were greener than green itself. And no weeds whatsoever! There was order in his gardens. He hated chaos. All that had the capability to grow, had to grow in line. His line. His law. In his gardens, no bugs allowed, no roaches, no spiders, no snakes, no ants, no nothing. He called these creatures, pests, and everybody knows that pests r the pest, and need to be eradicated, erased, and killed. So he sprayed, and sprayed, and sprayed some more. Clean beautiful gardens, that’s what he was after, that’s what gardening was all about. He was the master of it all.
His scrubs were trimmed. His trees were trimmed as well. And not just like that. Oh no! No way! He trimmed a certain shape out of them. I saw one in the shape of a bird. This was not too bad, as he allowed not so many birds in his gardens. Too much bird-shit u know. Can’t have that. Besides, when there is an overload of birds around, imagine the noise they would make during sunrise and sunset. Can’t have that either. It rumored he killed any stray cat on sight, hanging them by the neck from tree branches he would cut off later. Especially male cats were his victims, as they would piss everywhere if allowed to cruise his gardens. Not that he would spare the female ones as they too had that nasty habit of digging holes in his ground. The only ones who were allowed to dig holes were of cors his subordinates, and only when told so. Rabbits, rats, dogs, moles, and mice? Come on, have a heart. Not in his gardens. Preferably he worked for the elderly, as mostly they had no small kids running around anymore. Just picture it: Toddlers playing on his lawns, damaging his grass. Blasphemy!
He had a contract with a large nursery for instant delivery, as many of his plants died after a short while, and needed to be replaced regularly to keep his gardens beautiful.
And then there was this other guy. He would never import flowers and trees that weren’t native to his gardens. He saved rainwater in special containers, masoned according to old customs. The connected drip irrigation was used as needed, and not simply time released. He observed the phases of the moon, and only trimmed plants within a timeframe of five days b4 or after a full moon, depending on how fast he wanted them to grow. He loved animals, and never called them pests. He knew the value of for instance a lady-bird, when it comes to balance the presence of plant-lice. Spraying pesticides was alien to him. He loved the sight of a spider sitting there, waiting for the fly. He enjoyed the movements of the heron standing on one leg in the pond. He loved to see a cat licking the dewdrops off the grass in the early morning light. He studied the skies and behavior of animals, so he would know when rain would fall, and if a breeze would turn into a storm. He never raked leaves from under a tree to clean up the place. He made his borders high enough, so all that came off of his plants could decompose the natural way, giving life again to the living ones. When he touched the soil, the soil touched him back.
In his gardens many birds sang, and left a lot of shit behind as well, just like it occurs in places where no human hand is disturbing the course of events. When he worked in his gardens, or was strolling them at the end of the day, no animals where running away from him, as he was part of their environment, using his skills to empower nature, instead of dominating and crippling it.

His gardens were not only beautiful. They were alive!