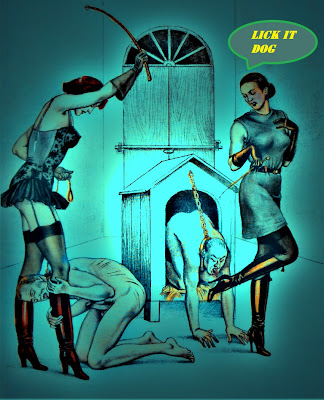 This drawing is from Bernard Montorgeuil, one of the d/s illustrators i like. Of cors i played with it a bit, to make it more to my taste. Many artists tried to repeat his scene. Nanshakh too. His version u can find somewhere below. Also adjusted by me.

Naturally there were also the more common animal scenarios, in which for instance i was invited to shoulder ride a man, who believed his happiness depended on simulating the behavior of a horse, carrying me in full equestrian attire from point A to point B. And if only these males would have wanted to be a proud Mustang, or a Lipizzaner stallion (sigh), but no, they preferred to strut around like a pony, some midget horse. My little pony escaped kindergarten, and a toddlers’ bedroom. Geeeez! Others entered their Walhalla when i leashed them like a dog, taking them for a walk around the block. Well…….um……..if they were courageous (crazy?) enough to go public, or when i really was in a mean mood and dragged them outside for all to see, whether they liked it or not. Most of the times tho, the best one can expect from these fierce Chihuahuas and timid Pit-bulls, is a short run in some remote and hidden backyard. What a sight, lol. A captain of industry, a powerful politician, or some nobody from the suburbs, getting naked, transforming himself into a panting dog, licking my boots, and barking like no real dog would ever bark. To think these men for instance r populating Wall Street, making extremely important financial decisions, which more than once determine the growth and decline of global markets, industrial complexes, and the financial wellbeing of individuals, makes me shiver. No wonder the world is constantly in crisis, at war, and repeating its history! Woof! 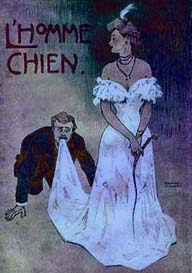 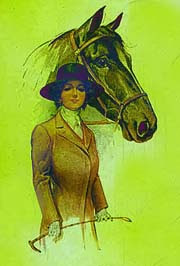 Talking about online pets, the scene becomes even sillier than in r/l. I mean, how ridiculous can it get, walking the dog online eh? Or sending ur mistress a bark or 2 through ur keyboard? What about training and obedience school? Mistress is typing ‘heel boy’. Do these dogs wear a collar and leash when exchanging instant messages with their owner? R they on all fours, typing with their nose, or what? Woof!

Online there’s a special breed of owners too. They don’t care so much if their followers want to be an animal or not, but they sure want them to bark, rewarding them with a ‘lil pat’ on the head when they do. They also want them to giggle at all times, and to smear lipstick on their snout. There’s a notorious charlatan among them who’s trying to convince his sluts that he’s an expert on traditional hypnosis and NLP (Yes that’s Neuro-Linguistic Programming. How did u know?), luring his victims into his web, by offering them colorful spirals and other junk. A former female enemy of him is now his ally, delivering the same trash, by making and selling so called unique hypnosis videos. Everybody seems to be very active and happy tho, forming one big family in trance, giggling and barking 24/7/365. Woof! 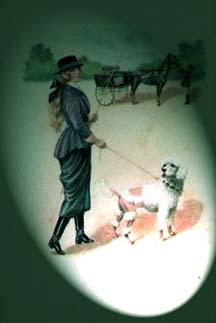 But i digressed. Shame on me! This is not about trancing the perverted, but human pets. So, back to animal farm. Woof! 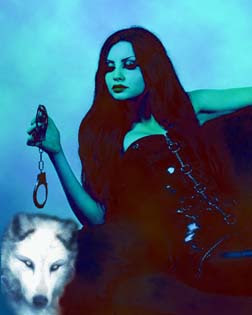 Male fantasy is infinite. I know that. So r their fetishes. There’s no limit to those either. Animal role play is in. No doubt about that. Especially playing the pup or kitten, seems to be of great value to men. Therianthrophy refers to this phenomenon, and tries to explain it. But i ask u, what’s in it for us femdoms? What do we get out of it? Even according to mainstream d/s norms and values the dominant should be # 1, no? Pleasure and lust for the slave r of minor importance no? Slaves do only exist for the pleasure of their owner, no? We femdoms rule! So, r there women, who really enjoy riding on the back or the shoulders of a male? A male dressed up like a pony, with a tail sticking out of his butt? Women who dream about that, who get aroused when hopping around in the bedroom, wielding their riding crops? I don’t remember i ever got horny from that. But i sure felt stupid. I asked many women what their experiences were, and all of them disclosed to me, they found it rather inconvenient, ridiculous, if not stressful! Woof! 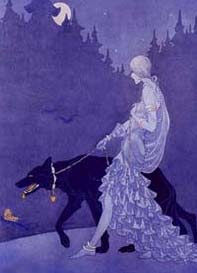 There is a blogger, going by the name of Saratoga, a male who believes he’s slave material, and heavy into evaluating herds of so called Dommes on his blog, who showed me the way to a woman who claims to love human pets, finding excitement in training males to become human dogs. She describes herself as a female supremacist. In her writings she tries to explain to the world what that means. I quote: “Female Supremacy is about ultimate authority, power and status belonging to the Female.” There! Now u know. Although i’ve read a good portion of her semi-scientific writings on the matter, poor me never could understand, what exactly this has to do with human dog training, the main content of her online existence. One of her videos shows her walking her human dog in public, letting him sit on the street, waiting for her, while she’s going to do errands, or something. Is this what turns her on? Is this showing what the ‘ultimate authority’ is all about? Is this slavery perhaps? In my book it simply shows a woman who’s making a buck by performing according to a male’s desire, and/or a woman who can only enslave a male, when bringing him down to animal status, unable to rule one with a strong personality. Whatever it is, femdom it is not! Ok, ok, i hear u. No need to go on the barricades. I know, anybody is entitled to formulate his/her own definition. Even if femdom is defined as………. female dominated by……..um……….go ahead, don’t be shy now……….u fill this in. Then bark! Woof! 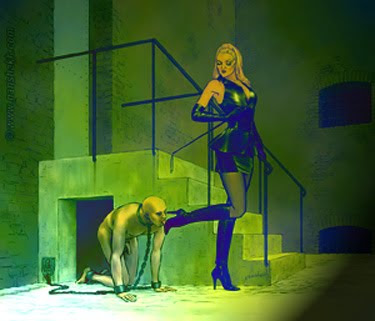 I love to ride horses. My favorite one carries the name of Ares. I truly enjoy sitting on his back, enjoying his strength, speed, energy, and loyalty. Occasionally it even turns me on sexually. No pony-boys for me tho. Not even during carnival. Hiiiiihhh! 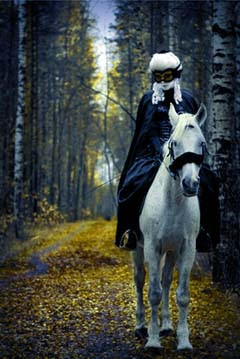 I also own a couple of dogs. Big dogs. I can’t stand small ones. I spend time with them on the beach, and at home. I chain and leash them. They will attack any intruder. They have a need to protect me. They never lick my boots tho. And when they try to lick my face? I slap them! I would never slap a human dog tho. Why is that? No favors! Woof!