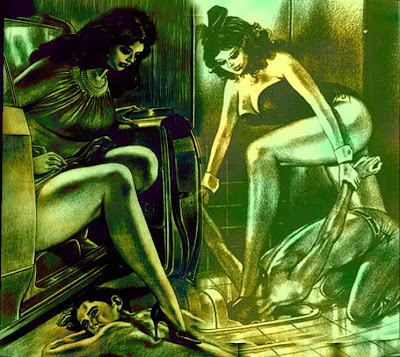 The self proclaimed radicals, the socially moved ones, the knitters of new world orders, the ones with holy quests for creating a better world for all, to at least save the planet, and to save us poor ignorant from all eternal evil, r never resting, and r at it again. It will never stop. It’ll always continue as long as there r people who believe in universal solutions, systems, and saviors. Fanaticism at its best is in session everywhere, trying to indoctrinate, to brainwash, to convince, and to suck up people like a vacuum cleaner, promising them happiness, peace, tranquility, everlasting love, and a few other adored clichés, as long as they’re willing to unconditionally embrace and submit to the slogans, generalities, and camouflaged vomit, these false prophets, gurus, pastors, and predators on human desperation r spreading around, simultaneously contaminating the planet they vowed to honor and save.

Better never resist or ridicule their messages, as all havoc will break loose, and u’ll be doomed forever. Yeah, they can only love and save u, if u do their bidding. They need u, u know. Without u, these strong, determined believers of change, hope, and positive thinking, will end up on a pile of garbage or in a sewer system, shrinking to mutant mental dwarfs, and helpless victims of their own medicine.
A few months ago, i was confronted with this depressing filth, on another blog, belonging to a lady i cherish, a woman of great insight, with an incredible drive to give original content to her life. This time it touched a concept i’m using to describe the intensity, uniqueness, and purity, of my sexual encounters, which i've called, the singularity. A singularity which can be repeated, but always in a new and oribal way, never seen b4! A concept which is unique in itself. A concept unspoiled, clean, and radiating health, like the waters of the second Ice Age. Now, parasites and gollums r trying to strip it from its essence, and to bring it down to their own pitiful levels of weakness. This angered me, so i commented on same, ventilating my rage, intolerance, anger, contempt, and hate, i hold for these slimy creeps. Here it is, in its raw and unedited form. More of the same, actually, lol.

Now even the concept, known as the singularity, has become a target, and under attack of the silly ones, the righteous ones, the weak & needy ones, the conservative in disguise ones, the artificial free & semi brave ones, in short, the new disciples of a rotten new freedom, decomposing healing practices, nauseating salvation, and obnoxious fresh authorities. Soon it will be raped from its essence, like it was done to democracy, love, honesty, loyalty, friendship, and femdom. Bah!
And what was their definition of time again? Time moves in a circle? Do i understand this well? Time exists without human influence? It’s an entity by itself? Maybe an independent process? Hahahahaha!! These people r only replacing the stupidity of the ones they despise, by their own dogmas, rites, rituals, and protocols, afraid as they r for life itself. They always need answers, they always need labels, they always need explanations, they always need definitions, they always need to make something holy & sacred, they always need some kind of savior, a leader, a messiah, and they always need others to confirm what they’re doubting themselves. But.....they never live, they never come to terms with their fears, they never practice what they're preaching, and never can stand alone! Lmfao!!

=====================
I say, DOWN with them, these simple minded world healers embedded in slime and bad breath. Trample them into the ground, into the mud. To the sewer with them, That's where they belong, crushed, ripped apart, to never rise again!
Ahhhhh, i feel better already. U too?
Posted by Ayesha at 10:15 PM