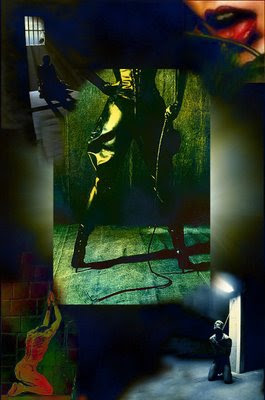 “Lasciate ogni speranza ch'entrate.” Not that u will find it there, but it could be written on the entrance door to the corridor that leads to That Place, aka The Labyrinth. But the meaning would differ from Dante’s one. It would even be its opposite, as i find hope one of the silliest concepts of vanilla culture. Dangerous too. And debilitating. And crippling. And…….. well a lot of other things which basically r keeping u from being what u could be, and from acting like u should.
Hope is crushing ur potential to keep ur life in ur own hands, and to dictate ur own future. It’s paralyzing u, and makes u inert. It’s an error to believe hope could help u to overcome difficulties, problems, and desperate hours. It was implanted in u by anonymous forces operating in ur culture. U were indoctrinated with the thought that hope was good for u. In fact u were brainwashed with the idea that something outside u was meant to do all the work while u were expected to do nothing but…………….. hoping. Hoping for the best? Sure. But, at times, also hoping for mega misfortune cracking down on ur enemies no? Maybe ur neighbor? Ur mother? Me?
But why? Why were u poisoned with this venom called hope? Cos through all ages (well as far as i know eh) people hate it when a person is going his/her way, is walking a different road, is deviating from the norm. Cattle and clones r applauded and praised. Individuality is condemned. Oh sure, at times it seems as if society is stimulating diversity, is encouraging originality. But not really. It is done only to keep the stray dogs, at least figuratively, leashed, to keep them within the group, and to give them a feeling that, although the r loners, they’re still welcome, and still belong to the crowd. And it works u know, as even rebels seem to abhor getting abandoned by the ones they dislike and dismiss. Well………. at least some of them. Few r able to disconnect from their surrounding society, and truly follow a path through the jungle cut by themselves.
So………. u r allowed and encouraged to hope, to hope endlessly, as it will keep u from acting, and in bondage. Vanilla bondage!
But again. Why does this happen? Why is this repeated ad nauseam? It’s fear of the unknown, and fear of change. It is fear of low self-esteem, and to feel insignificant. It is fear of looking in the mirror, and realizing how small u became, how u messed up, how u threw away the most precious thing in ur life, how u were slaughtered on the altar of conformity, how u sacrificed ur potentials just to be allowed to stay in ur group, to be accepted by cattle like urself. Now u will fight to preserve this status quo. Oh, not by urself, not like a lone warrior, but only when backed by ur group. And they will, they will, they will. Just to make sure they don’t have to look into their own mirror. Holy war!
As long as everybody thinks and acts the same way, people believe that what they’re thinking is the truth, and that their actions r right and valuable. No reflection is needed in a situation like that. All is well and all is good. In fact, this is Utopia, that horrible world where differing from the norm is not tolerated. The law is the law, average is king, dogma is holy, and hypocrisy is the tool to go soft on those who rebel but not revolt. It’s that world where u feel uneasy, knowing something is wrong, filled with hope, hope that things will work out while waiting in ur comfortable chair, treasuring ur social security, ur stock portfolio, watching CNN, letting the atrocities of this world pass u by on ur plasma screen while sipping ur coffee, and hoping that someone hopefully will do something about it. But……it will be hoping in vain and waiting for Godot. In fact, u don’t even care. Although u say u r hoping for instance that the poor will be fed one day, that war will come to an end, and that girls one day won’t be stoned to death just for having laid eyes on an a boy who is culturally/religiously not supposed to be with them, u will go ur daily routine, and reserve hope for ur own missing links.
So, the ones who r allowed by me to walk through that corridor to The Labyrinth, they better abandon all hope, as there will be no place for that in That Place. In my place u r all alone, all by urself, totally independent with all power to be urs, completely free, even when chained by me, tortured by me, whipped by me, and abandoned by me without hope. U feel this is a contradiction? Maybe even a paradox. Illogical? Pathological too? Well, in that case……….don’t hope i ever will call on u.