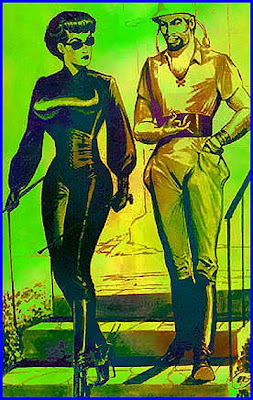 “Hi! no dom males hey?”And then he continued with : "wanna persuade me?" Isn't that sweet? No it is not! So what is it? It's typical male! Always looking for competition, always ready to fight, always in need to be defensive. Hmmm, is this really typical for the male of the species? Yes it is, although there r plenty of females running around on the surface of mother Earth, who r manifesting an attitude and behavior more or less equal to that of their spouses, partners, friends, bosses, or subbie hubbies. It's called emancipation, one of the more laughable concepts cherished in desperate housewives circles. Yes i know, most feminists, recreational femdoms, and pro-dommes would be ready for the kill, passionately putting a contract out on me , fighting each other to drink legally from my blood after, if they would learn (as they did many times already), that i find them nothing more than willing clones of the patriarch.

This thing began with him announcing in his blog that he was a switch, triggering in me the comment, that this was impossible, as maledom doesn't exist and is only an illusion. I have put forward this many times, and the responses were always the same, and equally ridiculous. Sure there r dominant males. Without any doubt even, and way too many too. But......... only in the vanilla world, where their glorious dominance created many disasters, leaving behind a complete mess in many areas. Yessery, the male of the species can be extremely dominant the vanilla way. Kind of a King Kong way actually, with a lot of noise, brag, physical and mental violence, and other garbage. Underneath however, these men r just like that ape, rather insecure, quite emotional, unbalanced, and maybe even tender (the only way my Elizabeth would allow them to come near her, hehehe!), but.....they would poop their pants if someone would notice. Instead, they’re obsessed with standing tall, showing women and other males who’s the boss, etc. Just check out a few so-called world leaders, or ur local bar, and u’ll find them easily.

All this is still going on, and will continue for a long time to come.

So, to the naïve observer our planet is just crowded with dominant males. But when it comes to the realm of d/s, to my world of sexual slavery, these men cease to exist. Not so u say? Sure, sure, moi observed too: A lot of playing is going on on our sacred kinky grounds, during the weekend, when the kids r at grandmas, in fetish clubs, and in some isolated castle of a deranged baron. Mainly cos so many females r playing along with these Masters of the Universe, making it look as if some males r domineering within the d/s environment as well. More or less like it is with mainstream femdom, where submissive women r lured into playing the domina, by their topping from the bottom subbie (yuck).

The best these males can do in d/s is to make even bigger caricatures of themselves than they r already, presenting themselves as Masters (bang….. now don’t u dare to skip the capital M eh?), running around punishing females or their own buddies, organizing and attending to conferences on bdsm, visiting munches, discussing ad nauseam all kind of d/s issues, and seeking acceptance from other erring individuals, while suppressing even more their inner longing to be slave to a woman. I only allow these types near me when in the mood to show them how easily i can make them do my bidding, how easily i can make them crawl for me. Then send them home!

“Yes Ayesha, we know already. U can stop now! U r absolutely right. There r many vanilla male dominants, and plenty of fake dominant males in the velvet underground. But r u really sure, there r not at least a few males, only a tiny minority perhaps, who r genuine dominant when it comes to sexual slavery?” Hmmmmm, now don’t get me mad eh? I can tell u first hand, and only out of first hand eh, as i don't trust story telling so much, that i never have met a true male dominant in my life. All the Masters who crossed my path, and mind u, i've traveled a lot, were more than willing to become my slave, or didn't dare to resist me whenever i had set my mind to it. Even those who made me doubt my conviction fell for me in the end, at times stalking me long after i had dismissed them. So no……..there r no genuine, non-vanilla, dominant males. And there never will be any creatures like that either! When it comes to sex, males can only flourish when being a slave to a woman. Sexual slavery makes a male more powerful and free than he ever could be otherwise.

Btw, a switch can't be a dominant as per definition. One can't be a genuine dominant and submissive simultaneously. Switching from one mode to the other is only possible when one is acting like an actor, ergo is playing. I'm not a player. Femdom is carved in my soul, in my brain, in my clothing, in my whip, in my music, and all the rest of my being and life. I don't go into domspace, snapping out of it when a session (grrrr, what a horrible word) is over. Neither do my slaves dwell part of the day in subspace and the rest of the time in other spaces. That's how it should be, and how it should stay. That’s what d/s is about. A 24/7/365 passionate way of living. Nothing more, nothing less. And no role play whatsoever eh? Never. Period. Hmmmm.......i take that back. When i would want u to play a role, u'd have no other option than to obey! Even if that would be the role of a maledom, lol! Don't worry tho. I only would do silly stuff like that when cranky. Not when moody or so. Then i would simply let u drop dead, ignore u, and forget u even existed, not caring if/how this would affect u at all.

What's that? What do i hear? Ah....... i see. My definition is not holy eh? My view is not universal eh? It's simply an opinion, no? Everybody has the right to fill in whatever he/she likes, to suit that person's taste, no matter how stupid that taste may be, right? Go ahead. Exercise ur one dimensional democratic rights. I won't stop u. Make a mess out of d/s as well. Rape it, take away its essence, its glory, its venom, its passion, and make it mediocre, mainstream, boring, and dull. And mind u, keep it especially ssc (that’s safe sane and consensual, u moron). And whilst u r to it, why not put a few lawmakers to work, writing the Bill of Slave Rights? Soon there'll be a Slave Union to defend those rights and bring me, Ayesha, to justice.

Don't get me wrong. I love males. Very much so. Well, i mean the ones who r going with the core of their being, the powerful ones, a.k.a slaves. But........ i love women more! Why is that? Plenty of reasons, but a major one is………they can take more, and whine less. And u know who r the biggest whiners of them all, the ones who can’t even take a softly administered caress of my single tail? U guessed it, smartass: Maledoms.