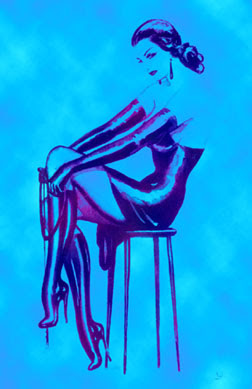 If u know who Lilith is, and who Eve was, then the following will be of minor importance to u. I wrote this some time ago as an answer to a question regarding the identity of these two. And if u don't have knowledge of L & E (although u must have heard of Eve while adapting to the norms and values of ur society during ur initiation and ongoing indoctrination process), it's high time to get acquainted with these ladies, and the impact they had/have on this world. I don't intend to become ur teacher tho, as i hate that profession, but revealing a bit of their personality won't hurt i guess.

So here it is in a nutshell (with a few changes to the original):

Lilith is the seductress, the one who possesses males and females. She’s the archetype of freedom, independency, assertiveness, sexual aggression, and honesty. She doesn't take no for an answer, and will always have her way. She's extremely beautiful, erratic, moody, sensual, manipulative, radiating dominance, and never ages. When she's entering a store, a restaurant, an opera house, a gallery, or a sleazy underground bar, there's instant silence. When she's dancing, time stands still. When she decides to have a sexual encounter, it will mark the life of the chosen one, and the experience will be engraved in his/her soul forever. While all men want her, nobody will have her. She will enslave anybody she wants, and is never asking for consent. She laughs at the supplications of pathetic males, who vow they want to be her slave forever, knowing they could never live up to their fantasies, and r only looking for a surrogate mommy, who's willing to give them satisfaction. Most women want to be like her, but r afraid to put same into action. However, there r a few who r resembling her, actually r her. Those women r femdoms.

Eve (Hawa) represents the mother, the spouse, the one who's taking care of her man, the house and the kids, a la the ideas of the Hamisha Humshei Torah, the Bible, the Qur'an, and for instance Heidegger. She's the submissive one, however with her own agenda, often trying to lure the male into actions he doesn't really want, but submits to, cos he's living in the illusion he's the boss after all, having a housekeeper and a sex partner to his disposition whenever needed, and also due to his inner hidden longing for a tyrannical, despotic woman, who owns him as her slave, taking away his burden of responsibility, and unbearable guilt for being so dualistic. Of cors Eve is far from being a slaver, but sometimes she's willing to play that role, just to please her man, and to keep him in bondage to her. She's the archetype of dishonesty, disguising same by displaying what is called in the culture at force, kindness, warmth, friendliness, altruism, etc. But......Eve has only slight knowledge of her core personality, and most women would even deny they have these tendencies, supported as they r by the patriarchal view on womanhood. And u know what? It often works. Many people seem to be happy with a situation like that. This, to a certain extent, is a good thing. Otherwise our mental hospitals would be flooded even more.

Many men want both of them of cors. Having their pussy, and eat it too, so to speak. They crave for Lilith AND Eve simultaneously. Point is, while Eve occasionally is willing (only out of love and warmth of cors) to 'force' her hubby into pink rubber panties, or to whip the living daylights out of him upon request (quite often for a considerably amount of money too), Lilith couldn't care less, and would never engage in playing a role, and certainly not a requested one. But when confronted with a Lilith-femdom (just to avoid any mixing up with the Eve variant eh?), all the aficionados of degradation, humiliation, dehumanization, ergo, the sissies, dogs, worms, pigs, wannabe slaves, and topping from the bottom ones, will hastily put on their gymnasium shoes and run, call their mom, or have a heart attack.