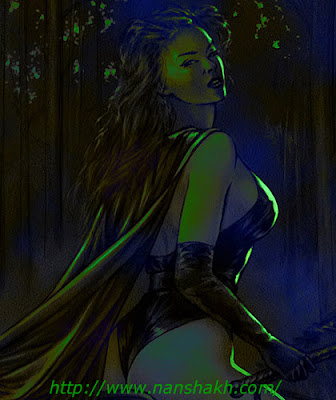 Oh, b4 we go on, don't let the title below scare u, as the remainder of this blog entry is in good old english. It wouldn't hurt tho, if u would pick up a few more languages on ur way to ur grave eh?

And when he's mentioning "this group", he's of cors referring to the action - uh....um...er....cough........scuse me - going on in http://groups.yahoo.com/group/ayeshasslavetrader/ for which group he once wrote this gem.

Imagine, this is the end of the seventeenth century, in some kingdom in western Europe. The setting: the ruins of a fortified abbey, probably the scene of some disgusting massacre when it was burnt and dismantled during some skirmishes. The place has always been abandoned ever since, and of course, rumours have it that it is haunted. Oh yes, i forgot, for atmosphere, put some appropriate music on, something like Couperin's 'Les barricades mystérieuses' (not that it's especially appropriate, but the title is). Now and then a half moon breaks through the low, fast moving clouds, making the remnants of arches stand gloomily above the layers of mist... and you notice the dark shapes moving stealthily amongst the ruins. At first, you're not sure, and a cloud plunges the scene in darkness again. Suddenly, in a ray of moonlight, you un-mistakingly spot sinister human shapes, draped and hooded in black. Glimpsed for a short moment before they disappear behind some stack of crumbled stones. Gives you the creep eh? Well, it should. I'm scared stiff already. Have i mentioned that there are some disturbing noises around you, unexplained, hardly perceived creakings and hisses and squeals, and then, a wolf is howling in the distance. Shudder. Maybe not such a big distance away actually...

But you go ahead. You are not scared by these mysterious silhouettes. It's your turn now to step out of the woods, and to walk straight through the mist, into the ruins. Others now walk alongside you, converging silently towards the same point. They don't seem to pay any attention to you, which is not surprising, since you too, you're draped in a long black cape, and your face is hidden under a high pointed black hood with only slants for your eyes. Just behind an arch, you find the steps going down into the ground, at the bottom of which a torch is spilling some reddish glow. Soon, you are walking with tens and tens of your companions, walking endlessly along a torch lit corridor that goes down... and down.... Only the shuffling of all the long black robes can be heard. Not a single voice breaks the silence.

After what has felt like a slow descent into some icy hell, you enter a huge crypt, huge as a cathedral, it's vaults so high that they disappear in darkness. Stepped rows of seats carved into the rock flank each side, and you can't help thinking of an army of ants as the silent black hooded shapes invades them.

Now the rows of seats are filled. You too have sat. 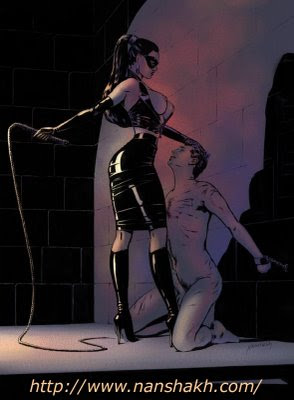 Torches seem to light up by enchantment at the end of the hall, discovering a massive stone stage, and a long narrow and steep stairway descending from the high vault straight onto it. In the absolute silent, all facing toward the stage, the attendance stands up while someone comes down. At first only her shapely legs are visible in the dim, dancing light of the torches, the sharp heels of the black boots clicking in the huge dark crypt. Then her sculptural figure appears fully. She is a slim, tall woman, dressed in a short black leather dress, with a large belt richly inlaid with gold and silver arabesques. Her hair is gathered in a high pony tail, held tight by a golden ring. She is not hooded, though her eyes are hidden by a slim black mask that allows you to admire her full red lips, curled in some cruel, smirking grin. She pauses at the bottom of the stairs, standing arrogantly, surveying her subdued, respectful audience, acknowledging their palpable apprehension. Hundreds and hundreds of members suspended to her will. Only her left hand is casually toying with the handle of a large bullwhip, resting on her shoulder. More a sceptre of her power than a whip.

At last, she walks to the sober, high, narrow monolithic throne-like seat, carved in black stone, that stands alone on the large stage. After she has sat, she imperceptibly nods, and all sit like one.
And though the silence has been oppressing till then, it still seems to grow, and grow... and keep on growing.
The hooded figures remain almost immobile... hardly moving now and then from one side to the other. Rather expectantly. But hours, yes hours, go by, and nothing happens...
Then one member stands up. For a while, the member looks taken aback by his audacity as all are turning on their seat to look at him. In some awkward, croaking voice, he dares to speak up at last: "Hi all, i... er.. i would like to thank you for allowing me into your secret society. I am.. er... this is a great honour and i'll participate a lot in future." Then he suddenly sits down, and one after another all the members resume their position, sitting solemnly. The silence now seems even heavier. As for the one who has dared to speak... it looks as if his black hood is blushing.
What seems hours later, another member stands up. This time it is a loud, booming voice resounding under the high vaults that start almost everyone: "Hi all, i have a password for secret society 'Hawk Queen' i want to trade for password for secret society 'Crushing Plum Pudding' or 'EscarpinsLickers', anyone interested?"
A thunderous wave of scandalised whispers ripples through the audience. Obviously a new member who ignores the iron rules of the secret society, or maybe has even deliberately chosen to ignore them?
Apparently impervious to what is happening around him, the guy goes on: "Come on buddies, no one's interested? Or, i'd even trade for a password for secret society 'La Cruelle'.
No more scandalised reaction now. Everybody knows the appropriate chastisement is about to be enacted. Those members sitting around the silly trouble maker are trying uneasily to shuffle away from him. And it comes. Without him ever noticing it. While the lady has remained perfectly still, sitting haughtily on her high chair, her pony tail has slowly risen behind her and is now dangling ominously high above her head, as some glittering black snake, pointing in the direction of the offender. He never saw it coming. With hardly a swish, a flash of greenish lightning links the tip of the pony tail to the top of the man's hood, and instantly his black robe and hood crumple down on his seat, empty, some greenish wisps of fume lingering where he stood.... There is only a murmur of assent in the audience. 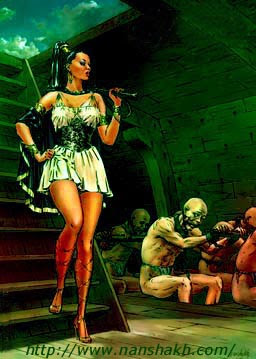 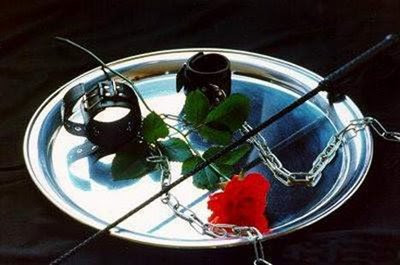 Yes, you will have guessed it. This secret society, centuries ago, was actually the ancestor of a Yahoo group. Well, those were rough times, of course. And people had little to say then. It's so different today.
Mmmh, i'm wondering if the purpose of this group is appropriate to stimulate participation? Or rather, if the majority of members came to the right place, or, another way to put it yet: if they are here for the right reason? You know: "This site is designed to worship and glorify the grace, beauty and legitimate arrogance of all femdoms..." "...the flagship of Ayesha, a ruthless and cruel female dominant." and so on. Because participation is rather scarce, to say the least, and when, recently, someone raised the subject of linguistics, all of a sudden the discussion was raging. And now that this thread has petered out... we're back to dead calm seas... not a ripple any more. Well, almost. Could it be that linguistics is a much more capital and fascinating issue than female domination for the happy members?
I'm not only talking about this group, but most groups supposed to be about femdom. I'm a member of plenty of those -like most of you i bet- some with only a few members, others with thousands. Some rather good, and some painfully boring or vulgar. But sometimes, for weeks in a row, there is not even the start of one little thread in any of them. Once in a while, moderators from such groups blow their top and start harassing the members, usually ending up with such threats as: 'participate, or else...'. For all the good that it does, they might as well try to stop the tide by slashing the ocean with a sword. I remember i tried that once when i was four or five (with a small wooden toy sword, eh!), and it was rather a depressing experience. (Well i never pretended to have been a very bright kid anyway !)
Mmmh, maybe we could put the "question of the week": Is female domination such a bore?
I don't think so. On the contrary, it's very exciting. Yet, it can be said that the immense majority of people come to such groups with the same good disposition and enthusiasm as they display in their dentist's waiting room. That is, they might pick up a magazine and condescend to glance at it, but in any case, their motivation is deadly set on: Gloomy !
This being said, many still, some 0,02 % of members, are still eager to have a good time, and maybe even an interesting or enriching experience.
Nanshakh
----------------------------------------------
Now, wasn't that a great read? Thought so. A lot has happened since he wrote this story, and yet........i still enjoy reading it.
Note: After having been cruising Cyberspace for some years now, i came to believe there's not so much difference between the real world, and it's virtual partner. In both, the keyword for human communication and interaction is mostly --------->>> Indifference.