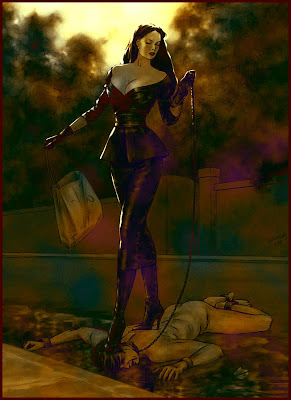 Of cors the superb drawing above is from Nanshakh. As usual i had to temper a bit with the coloring :)

No, i’m not referring to that creep from Uganda, who killed close to 500,000 people, but to an art/cultural movement at the beginning of the twentieth century. Zürich was their city. The place they gathered was called Cabaret Voltaire. Dada developed anti-art, as a way to express its disgust with society in general, and contemporary art in particular, accusing the latter of collaborating with the bourgeois elite, contributing to war, and supporting other cancerous phenomena, by embracing traditional norms and values, instead of revolutionizing them. It’s an art form i feel related to, as i’m in favor of contrast, anarchy, uncommon sense, chaos, irrationality, and constant criticism of the establishment, by putting and keeping same under tremendous pressure, in order to at least embank its insatiable hunger for restricting people’s freedom by developing and implementing zillions of rules, laws, and other systems of repression.
I guess Dadaïsts, in a way, felt related to the work of Voltaire, his satire, and daring opposition to the powerful French institutions of his time, as well as religion. One could argue, that Voltaire was a revolutionary, operating under extreme difficult circumstances, and a champion of freedom and social reform. And yet, he’s also an example of how deep rooted Anti-Semitism is, as he hated the Jews, and considered them barbaric and inferior. The same counts for other giants in art and literature, i.e. Blake, Liszt, and many others.
Dada in its purest from didn’t last long. The movement split up after a while, giving birth to several new branches. From the Paris chapter came Surrealism, which is another art form i’m holding close to my heart.
It’s sad that movements like Dada die, never get accepted by the masses, and never r understood. On the contrary, they r seen as insane, counter productive, and a danger to society. A society which is killing its roots, and destroying the foundation on which it originally was built, by eradicating individual creativity, independence, freedom, power, desire, potential, deviance from the norm, and initiative. It’s an illusion to believe these traits r encouraged by our social, political, and educational systems. Sure, the ‘elite’ of our society wants us to believe they r advocating development and growth of these traits, by telling us how important they r for a sane and just world. But they don't mean it. Bunch of greedy liars, that's what they r, condoned and supported by indifferent, and equally greedy morons.
Aaaahhhhh……….but there’s Neo-Dadaïsm, and even Neo-Neo-Dadaïsm. Such a relief. But i’ll stick to FFD. Much more realistic, and not dependent on the ‘one man one vote’ hysteria. Voltaire was right when he postulated, that democracy was inferior to enlightened despotism. Together with that other notorious one, Donatien de Sade, he might have been a good slave to a Jewish Gypsy woman after all, although she would never have accepted him to her inner circle.
Then Nanshakh wrote:

For all his wit, brightness, shortcomings, and insufferable traits, Voltaire is also somewhat a disappointing character, at least under the daring revolutionary angle. And mind you, I really like Voltaire. But he was not much consistent with his purported opposition to the establishment. After all, while criticising the "ancien regime" (which was the current regime at the time) his first and foremost ambition was to be admitted at the court at Versailles. Where he eventually and reluctantly managed to be accepted, but not for long... One evening, to try to stop his mistress from losing heavily at the game at the queen's table, he eventually whispered to her that the queen was cheating (which everybody knew except his mistress), and so she had better stop playing before losing too much. He whispered it in English, but someone understood English at the table, so they had to run, but run, run very fast to escape. To run and go into hiding. Again. By the way, after that most colossal of all blunders, he went into hiding in Madame's castle, Madame being the King's sister. That residence was reputed to have the most beautiful lambris (wainscotings?) of France. So it's in those most extreme and difficult circumstances that the champion of social reform operated one of his routine retreats, enjoying the very refined conversation of his extremely cultured hostess, and her exquisite table!So much so for the daring opposition of that revolutionary to the French institutions of the time... Voltaire operated most of his opposition under such adverse circumstances, amassing a little fortune in doing so, and enjoying the company of the most illustrious monarchs and aristocrats of the time. Even the first time he was jailed at the Bastille, the governor of the Bastille complained to the Regent after some time that Voltaire's cell had become the most fashionable salon of Paris. Well, maybe in that sense he was exceptional for a revolutionary, he was consumed by ambition and social recognition, but at least, he was really very intelligent and amusing.

All this as a manner of introduction to express my doubts as to the sincerity of the Dadaists. First the need to make one's art within a movement is in itself so conformist from the start. As if one's work could only be valued in relation to what preceded, surrounded and followed it. In fact the need to created a movement, with the inevitable manifesto in most cases, is so boring. And then, they, the dadaists, and then all the neos that followed, and the surrealists and all the others, were about as anti-bourgeois as Voltaire was. Without the wit usually. After all, they were the artistic establishment of the time, and yes, they did sell very well. Ok, they were considered decadent and abhorred by the Nazis and other fascists of the time, but those were really not the reference in art circles then eh! In fact, for art amateurs -and rich collectors- of the time, it was a reference to be abhorred by the reactionary clique. It was not the art condoned by the Francos, Hitlers and Mussolinis that was selling well in the 'right' galleries in Paris, and that art dealers crossed the Atlantic to buy.

So.. all that to say, you are so right, Ayesha. FFD is something to stick by. And to live by for those who can. What else? Only... as long as it won't be a movement I suppose.

Ah, those tribes, how I hate them.

If that can be the definition of enlightened despotism, great, but only on a very personal level then.