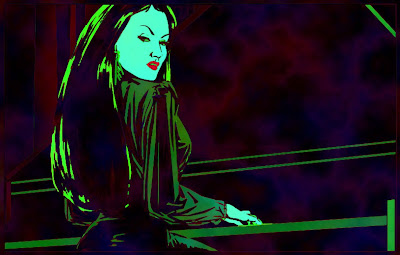 Once my father yelled at me: : "Ayeshaaa, stop harassing that piano". I must have been 5 or 6 years old at that time, but i remember his anger and despair vividly. The poor man couldn't help himself, as he wasn't adjusted yet, to a daughter who clearly tried to find her own way in the rather rigid and dogmatic world of classical music. Same story in school, in church or the synagogue, during ballet lessons, well anyplace were people wanted me to comply with their rules and regulations. I hated all that, rebelled against it, and resisted it to exhaustion.

I love to play the piano and can spend hours caressing, fighting, and seducing a Steinway or Baldwin, to get out of them what i want. I manipulate, vary, reorganize, and violate the work of famous composers, taking possession of their souls, and bring them to life again. I'm still here, but via the piano, i communicate with them in the afterlife, taking their work to a higher level, into a different dimension, making it better. More or less what i occasionally do with Nanshakh's drawings, of which there's an example on top of this blog. His original was in black and white.

In fact, i'm not playing the piano, i'm dominating the thing.

As the years passed, i became a mother myself. My daughter is a grown up now, living her own life, and is as crazy about the piano as i am. In contrast to my own youth, i kept piano teachers far from her. All i did was encouraging her to touch it, to enjoy the music she got out of it, and to enslave it. When she's visiting me, we test each other: Who's the best at the piano. It's almost a ritual. We dress for the occasion, as if it were a public recital. We love to wear contrasting colors. If i would be in black velvet, silver jewelry, and red heels, her choice could be, off white leather, black pearls, and matching boots. Add to this a room with only candlelight, et voilà, the perfect setting to collide. We compete vigorously, each time convinced that in the end, there only can be one. How wrong we r, cos in the end the 2 of us unite too, in one passionate 4-hand, communicating on a different level, and wiping away any distance between us, or whatever is left from our silly competition. It's very intense, and strengthening the bond between us over and over again. It's a very sweaty affair too, and we desperately need to shower when our musical hurricane came to a rest.

There must be positive chemistry between me and a composer. Like i have with Chopin. Otherwise i refuse to play his/her music. This not only depends on the music itself. For instance, there was a time i adored Franz Liszt, till i learned about his anti-semitism. I loved to play him, as most of his works were challenging to me, asking from me all that i got. It hurt to let him go. Very much so. For me there's no middle road tho. I'll never play him again, although his hate for the Jews was by far not as virulent as Wagner's, who on top of that hated women, or rather, was afraid of them, as is displayed in all his works, were women (mostly) die a fatal death. Same story when it comes to art, and especially poetry. Once i find out an artist's personality is contaminated with xenophobia, fascism, or related filth, it's over.

I selected 3 videos of women who i believe possess the passion i was talking about. Do not only listen to the music, but observe their body language as well.