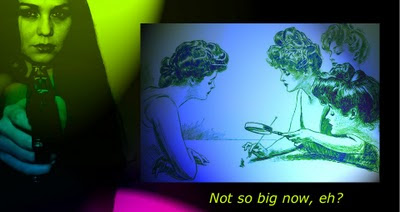 It all began with a bullfight. I hate bullfights. As i hate all activities where animals r tortured and abused for human pleasure. This time the bull got to the matador, hurting him big time, and thus made my day. I wrote about this on my Yahoo Pulse blog, triggering a variety of comments. Somewhere in the middle it boiled down to a discussion about hating people and taking revenge on them.

A girl going by the name of Tamara argued, we never should hate anybody, or should use violence.

At that point i deemed it necessary to share a true story. I wrote (a bit edited):

Once upon a time there was a woman who was engaged in activities other people couldn't stand her to do. They caught her while she was trespassing their territory, bound and blindfolded her, and threw her in a cell. Two days later, without food or water, 4 men came in to interrogate her, using severe torture to motivate her to answer their questions. She was raped several times as well. This went on for 3 days, as she was a stubborn one, and didn’t give away anything. The final day they put living cockroaches into her vagina, and closed it by sewing her labia together. Then left her in agony on the floor. Question for Tamara: Would “they” (the anti-haters) come, and say to this woman as well, not to hate?

And she replied (a bit edited):

If 'they' did say that, then 'they' would have the moral high ground, the possibility of forgiveness rather than just an eye for an eye. You could understand the hatred there, but as you’ve said yourself before, why tread the same path as everyone else, why not step away be the one that calls for an end to violence instead of continuing it on? Be the bigger person.

My response to that:

If they would dare to say that to that woman, i would kill them on the spot! 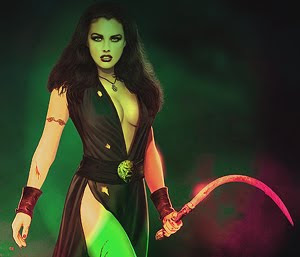 Then my friend (well…um….i’m not so sure about that nowadays) the SnowFox jumped in, and said:

Tamara, let those who have suffered have their hate, don't diminish their value this way! If YOU can forgive and not hate those who torture and destroy people, or animals, then think of yourself as a bigger person if you want. But we can do without the forgiveness-tyranny that's all around. You wouldn't speak about things like 'moral high ground' and 'bigger person' to someone that has been destroyed for life, and who cannot stop feeling hatred and bitterness. We are always presented with stories of good people that do not hate those who did awful things. But there are other stories, there are people who will not accept such atrocities so easily.

Which made Tamara say:

But then you have to admit that’s not really advancing the human race at all is it? We should be learning to better ourselves, not devolving back into being animals. Yes people do terrible things. So what exactly is the point of doing terrible things back? Where would it stop? It’s easier to just hate back than do something positive. Why take the easy route?

Now i’m (almost) sure, people like Tamara mean well, but also that they r spreading their ‘turn the other cheek’ messages from a secure and safe environment, and never had to endure what the woman in my story had to endure. Besides, one has to be careful when attributing too many positive traits to Tamara. Reading her foul language for instance on Carl Ray Louk’s Yahoo blog ( the guy is a huge fan of silly and rigid ultra right wingers like O'Reilly, Limbaugh, and Beck, who believe their ideas r the solution to all problems and injustice in this world) makes me wonder about her sincerity and integrity in matters like this.

When Tamara talks about ‘the easy route’, she doesn’t know what she’s talking about! And i can tell, cos i walked many ‘routes’. Taking someone’s life, taking revenge, getting back at the attacker, and destroy a life, is not an easy thing to do. It doesn’t bring glorious satisfaction either, it doesn’t solve anything, and it certainly doesn’t undo what was done. But walking away, leaving it as it is, not confronting the sadists and scumbags, and dumping ‘an eye for an eye’ in the name of ‘advancing the human race’, doesn’t make one a bigger person. I strongly believe that many of the ‘peace-talkers’ r simply cowards, who r riding on the waves of what’s considered political right in some environments, that way freeing themselves from that unbearable feeling of being a coward. I touched this also in an earlier blog called: “World Healers? Yuck!” These people don’t have ‘the moral high ground”! These people r not the ones who stand on the forefront to ‘advance the human race’! Instead, these people r in fact the ones who r stabilizing exactly what they say they oppose! They never stand their ground. They always back off when it becomes risky, and let other people do their dirty work! Then criticize them! These people obediently vote during election day, cursing their chosen leaders later. These people can be found at mass gatherings, protest demonstrations, cozy party meetings, and nowadays, at so called tea parties. They always know how to create a better world, but never will be the creator of such world themselves. Instead, they demand other people to do that. Then criticize them. U will never see these people risk their life, or even their job, to personally help someone who’s in danger, who is attacked, raped, killed, or brutally traumatized by a political system, a junta, a prison warden, or any other authority. Oh no. Maybe they’d call 911. But that’s the best u can expect from them. These r the people who, on humanitarian grounds lol, supported the freeing of the Lockerbie hijacker who killed hundreds of people. These r the people who welcomed the freeing of 3 World War II criminals, sentenced to life in Holland, cos they were so old and sick, pushing aside the feelings of the ones who suffered under the swastika as of minor importance. These should be the bigger persons? Yeah right! These r the bigger assholes! 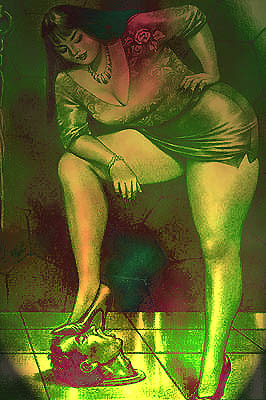 Tamara wants the human race to advance. Tamara wants us not to lower ourselves to the behavior of animals. Another set of platitudes! I’m not sure of what’s ‘wrong’ with ‘the human race’, other than maybe that most people with different backgrounds can’t stand people from other backgrounds, or that many humans seem to be indifferent when it comes to taking care of our habitat, but there’s nothing ‘wrong’ with animals. Not even when termites r destroying my house, or a bull is killing a matador.

I don’t think humans of our times r better or worse than the ones who were here b4 us. The circumstances can change, technologies can improve, etc etc. Morals, norms, beliefs, and values can change, but human nature will stay the same. There were, r, and always be people, who will stand up for each other, who will deceive and torture, who will look the other way, who will be indifferent, or who will care. Well, at least for a long long time to come. And when it would change, it’s better to talk about trans-humanity then, cos it will be a different species.

Humans b4 us were not more cruel than we r, nor were they less altruistic, or whatever. It’s not the race, or the group, that should have our attention, but the individual! If there should be advancement in some areas, then it should be on an individual level. Lilith knows we could do in this world with less assholes indeed. So, if Tamara and her likes want to advance the human race, they should be working with individuals, and especially on themselves. Not systems. Not governments. Not generalities. And not attacking those, who r willing to stand in her corner, to defend her with their life, when the scumbags have reached her doorstep! 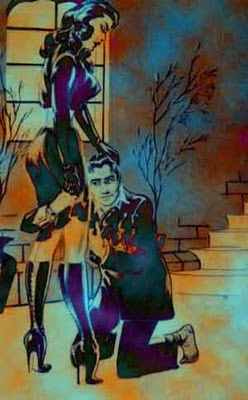 I took revenge many times. Physically as well as mentally. My rage and hate helped me to overcome fear and cowardice. Same counts for those who risked everything, and stood by me in my darkest of hours. I’m proud of them, and me. But i’m not proud of my actions, as they only brought sorrow and misery to other people, and made me sad as well. Still, i can look in the mirror every day, and love myself, instead of hating myself, had i acted in any other way and being applauded by others as that bigger person who had the moral high ground.

Note: The first video shows a woman who doesn’t only speak out, but also is acting on her words. I doubt she would agree with my philosophies, left alone my actions, but i think we’re on the same wavelength still, and i admire her. A rare gem!