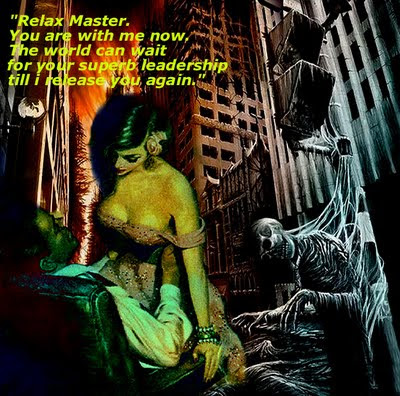 Here’s another bunch of random thoughts of mine linked to politics, law, and leadership, brutally taken out of the context they once were part of. Some people believe that this will change or damage their meaning. There’s truth in that. But i also believe, people often use same as an escape and excuse for not to be held accountable for what they once wrote or said. Besides, a sentence taken out of its context can become more provocative, mind boggling, controversial, intense, or striking, than it ever could have been within that very context. Given for instance the long-windedness, intransparency, and incoherency of many a prose, taking things out of context can be a great thing to do. And it does fit my personality, no? I love to picture things in their extreme form, black and white, black against its darker form, and crushing the grey areas of common sense, while knowing perfectly well that each coin has three sides. Call it one of my small rebellions, my tiny revolutions against a pedestrian crowd, led by fake feminists, narrow-minded freedom fighters, and ego-tripping world healers. Btw world healers? Go here. 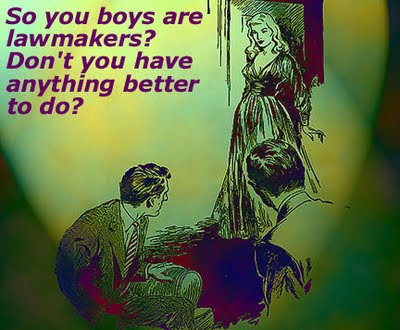 As long as people think they need leaders, and as long as leaders think they must lead, nothing will change. Many said they came not to destroy, but destroyed anyway. Many claimed their purpose was to help others. They lied.

Laws r serving and protecting those who can’t stand people who tend to behave differently from what the lawmakers think is right or wrong. In short ……be like me, behave like me, do as i say ……or else……

And of cors laws do also exist, cos so many people dislike to stand alone, and r afraid to make the decision between what’s right and wrong on their own! 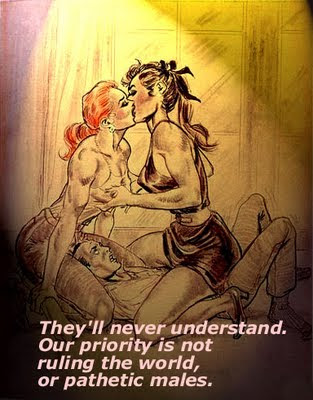 People should try to get rid of the goddamn leadership, in whatever form it presents itself or is created, and, for a change, start being responsible for their own actions. We don't need anybody to represent ourselves, to take things out of our hands, etc. Maybe then, human indifference will decrease. And don't tell me it can't be done. I live like that.

Typical patriarchal rubbish. Only women striving for silly emancipation would have an urge to rule the world, and thus becoming clones of the male of the species. The stupidity never ends.

Sometimes i play along with politicians, captains of industry, or other self- proclaimed powerhouses, gradually choking them with their own filth. And these weaklings love it even, rofl. 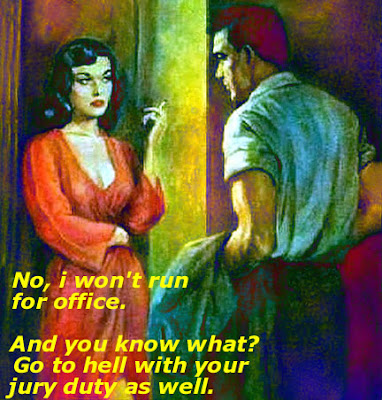 See? That's what i mean when i say that in these so called democratic countries, the main goal of the authorities, being them politicians, ceos, teachers, priests, etc, is to keep people in line, to indoctrinate and infect them with their lousy norms, values, and beliefs, tolerating deviation from mainstream culture only when it stays within the boundaries of the establishment and its order, while telling them they’re free, and promise them to fight for their freedom, no matter what. Liars!

There r great women as well as great men. It's just that great men need guidance from great women. So let's go for the mix, and kick the scumbags of both gender to a parallel universe or something. That's how humans ended up on this planet too, u know.

True manipulators were brainwashed by their brethren (and sisters!) not to act like a bully, taught to present themselves as overly friendly, deeply concerned about the wellbeing of their victims, and indoctrinated with the notion that audiences r less critical when perceiving them as warm, compassionate, and caring.

If on the other hand, u want to win, to surround urself with admirers, and to be seen as a pillar of society, yes then, by all means, go and corrupt the legal system, misuse it, find its loopholes, manipulate it, and be the champ of opportunists. 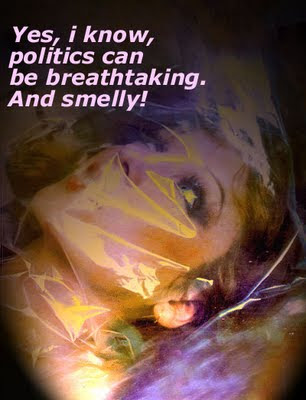 It's always the vassals of the stinking and slimy shitheads in power that do the dirty work.These creeps r even more disgusting then their leaders, as they always claim it's not their fault, but the responsibility of the ones who sent them. Most r even proud of themselves to have done their duty, goddammit.

Our world leaders? Those smooth talking snakes? The ones we (well not me eh) voted for? Them carriers of democracy, a.k.a the Righteous Ones? Ah, they r only interested in playing down El Mozote and places like that, to cover it up, to delay justice, and to keep in power the ones who support their smelly interests at home.

And that’s the sadness of the majority of so called revolutionists i have knowledge of. They all need support from others, preferable from large groups of people. Only a few realize, revolution incorporates the complete break with the status quo, and more importantly, once the storm came to rest, to take care not to crawl back to what u were fighting against, to repeat the same corruptive action, and abuse ur new acquired power. All the rest is just lame compromising.

It's the price of a decaying democracy, where 1 ass has 1 vote, and the big asses r manipulating the rest of the asses, so they can sit relaxed on their fat ass, making the rest work their ass off. 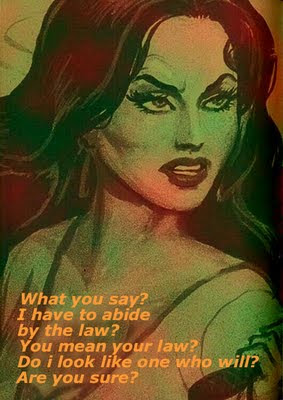 The liberals? I’m not sure, but according to modern day scriptures found by conservative archeologists in the hidden cellars of the Watergate Barn, they too r desperately copying/pasting. But only material that already was copied/pasted by the conservative ones.

Vanilla is not a word to describe someone who is different. It is used to describe the herds, clones, and clowns of society, which r replicas of an anonymous authority, blindly defending what is not theirs but was implanted by teachers, priests, politicians, parents, and other key people, who on their turn were infected by their educators. In short, the term refers to the masses which think, act, live, and die according to the role(s) their (sub)culture expects them to play. 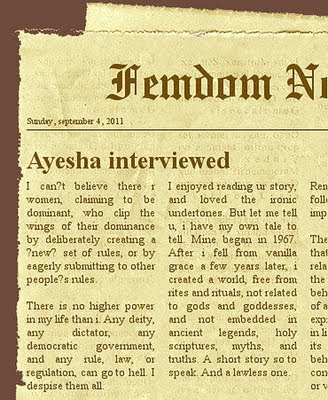 I can’t believe there r women, claiming to be dominant, who clip the wings of their dominance by deliberately creating a “new” set of rules, or by eagerly submitting to other people’s rules.

I enjoyed reading ur story, and loved the ironic undertones. But let me tell u, i have my own tale to tell. Mine began in 1967. After i fell from vanilla grace a few years later, i created a world, free from rites and rituals, not related to gods and goddesses, and not embedded in ancient legends, holy scriptures, myths, and truths. A short story so to speak. And a lawless one.

There is no higher power in my life than i. Any deity, any dictator, any democratic government, and any rule, law, or regulation, can go to hell. I despise them all.