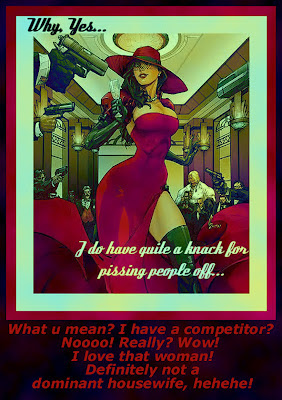 Yes i know. Y’all can hardly wait for the next flaming episode of “Dominant housewives” to see the light of darkness and to be unedited published in this virtual medium. Patience people, patience. It will come, it will come for sure. In the meantime i wanted to dedicate a few words on protection, and especially on protection of the so called weaker sex. How so? Well I’ll tell u. In the beginning of this lovely month of אִייָר‎ 5772 (May 2012 AD for the apostates of the one and only true faith and religion) a lady, residing in a home where FLR is celebrated as the ultimate way of living, summoned the male audience of her blog to tell her if they were ready to act as the protector of their own mistress/goddess. Of cors this was all hypothetical, as most of these males were single, not involved with any kind of r/l d/s, and thus not in the position to speak from firsthand experience. On top of that, even hypothetically one couldn’t expect too much, cos they also were only sorrow examples of their gender. Well, maybe one or 2 were average, but who cares. Let’s generalize a bit this time.

I would have given u the url to her blog, were it not that she recently got very pissed off by a lot of comments regarding some farting dominant housewife. She therefore angrily deleted various entries of her blog, including the one i was referring to. So the reason to guide y’all to her sanctuary became obsolete and nonsensical. Hmmm, i’m sure u too have noticed this kind of action became almost viral these days, hehehe. I wonder why?
Anyway as the seasoned prophetess that i am, i wrote to her: ".....as a servant and as a protector?" None of them! Well... um....maybe some of them could be a lousy third grade butler or something, but a protector? Lmao. From what i've read from their contributions to this blog, i don't expect any of them to have any skills in that area. Not mentally, and certainly not physically. But then again, u seem to have and like a mellow, harmonious, and sheltered way of living urself, far away from major antagonism, chaos, risk taking, adventure, and dangerous situations. So chances r u don’t really need a man who can stand his ground when called to the task to defend u. And besides, a domina shouldn’t need a protector in the first place. She should be able to take care of herself. Ever heard of Krav Maga?

The fact that up till now nobody answered ur question speaks volumes, don’t u think?
As usual……no response. Well not from her. And as time went by, nothing from the many docile and often slimy sweet talkers visiting her site either. So i was right. Again! (sigh).

But wait, there was one (1) exception. Some ignoramus had the courage to come up with: As for being a protector, I like to think that each member of a successful relationship protects the other in some ways. We each bring certain knowledge and ability to the table and combine those to make the whole greater than the sum of the parts. Bang! Now isn’t that something? With this powerhouse around, any woman should feel safe now eh?


He also needed to let her know: While I realize it is out of order to criticize a dominant, I find the comment from Ayesha quite offensive. A good FLM should be based on mutual respect and concern for one another's well being. Clearly, she has no respect for men at all. I pity the man who calls her mistress. Having read this, a deep silence came over me, and struck with guilt, i burst out in tears, flooding the place for hours. I’ll spare u my comment on his crap.

So in the end i advised this lady: ……should u ever meet one of these delicate brave paper tigers r/l, never take a stroll with them in some nasty backstreets of for instance LA or Miami where the true machos r ruling and hiding ;)

Again, no response. Yeah, ingratitude is the way of the vanilla world.


Anyway, now u know why i had this urge to publish this first. It was an emergency! Yes, that’s what it was! I just had to bring this to ur attention! To protect u from these creeps who will never protect a woman and will drop her like a hot brick the minute it becomes a bit more dangerous or out of their pitiful bourgeois comfort zone. No woman deserves a treatment and ordeal like that! Seriously, no woman should ever be in a position to have to rely for her protection on someone else, and certainly not on a weakling preaching the philosophy of the ”loving female dominant” who, contrary to that, secretly is only trying to make that so called dominant to do his bidding. Instead, she should be able to take care of herself. Under all circumstances!


See? Here again we have proof of the difference between femdoms and the rest of the female gender. Femdoms have an inborn urge for independence. Hence they make sure to pick up the necessary skills to protect themselves (and others, lol) when in need for same. Femdoms r always on the alert to defend and attack simultaneously. Femdoms hate it when their safety depends on others. Not so with dominant housewives, FLR queens, damsels in distress, and other vanilla females. They rather  wait for their heroes, and want their white knights, their lancelots, and their don quixotes to come to their rescue, to fight for them, or else helplessly perish in agony on the altar of eternal love and loyalty.


Of cors, even femdoms welcome and love help from other warriors. I know i do. I wrote about that in “Corrective measures” remember? And i also wrote there, and in many other places, that i hate violence. All true warriors do. But we r ready and very willing to ruthlessly deliver some in abundance the moment the scumbags and filth suppliers of this world call for it. Always! Yes, aggression is sleeping within us. Like a sweet little baby. Like a nuclear bomb. Better not be too noisy, if u get my drift.

Now, watch and enjoy the videos (a long and a short one), meet a few real men, and two women i would want to have at my side when having to fight the enemy. Especially the first one stole my heart. And yes, the woman in the second video looks a bit like the one in the first, but it is not her :)

Note: The first video was taken off due to copyright stuff or something. So i replaced it today (june 16) by another one. But the content stayed the same.

Now ladies, i won’t asked u to get skilled in the military variant, but r u still not eager and convinced to enroll in a beginners course of civilian Krav Maga? No? Oh jeeez, then for Lilith’s sake, at least carry a kubotan keychain the next time u leave ur sheltered house. Come on. Don’t be a pussy! 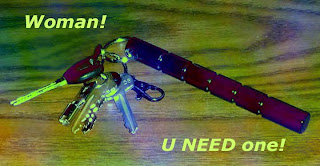